By 1965, Chevrolet could do very few things wrong in the eyes of most American car customers. Capitalizing on new models and mostly strong sales over the past decade, it all culminated with more than a million units sold in the United States in 1965, as all new full-size Chevrolets were redesigned. The company hoped the trend continued for 1966.

This example, a 1966 Impala Sport Coupe, was made during the second week of May in General Motors’ Arlington, Texas factory (VIN code R). Wearing custom blue paint designed to mimic the factory Danube Blue, this car’s paint and trim are in overall excellent condition. The car left the factory wearing Cameo Beige (code V) paint.

Cooper Trendsetter SE radials, size P205/70R15 in front, and Cooper Cobra Radial G/T tires, size 275/60R15, are in back. Each one is wrapped around a vented alloy wheel. The wheels are in good, original order while the tires appear in decent condition. In the trunk is a 15-gallon fuel cell.

Under the car’s fiberglass hood with a reverse air intake is a 427 CID Turbo-Jet V-8 engine bored out 440 CID. The engine was professionally built by Scotty’s Racing Engines in Spring Hill, Florida. Other engine upgrades include aluminum heads, a Champion radiator, a four-barrel carburetor and MSD electronic ignition. Backing the engine is a Turbo Hydramatic 350 three-speed automatic transmission with a shift kit and a 3.08:1 rear end. Driver convenience feature include power steering and power brakes, but don’t look for air-conditioning or other creature comforts on this one; it’s a racer.

Inside, the original black vinyl interior (code 814) is in overall satisfactory order. A tear is visible on the driver’s bucket seat bottom cushion, with a second tear on the passenger side bucket seat. However, the rear bench looks good for its age. While the dash and center console wear SS badging, those were added later. The two-spoke steering with separate horn bar is in good order, while center console could use a little TLC. Residing within that console is a custom B&M shifter. A custom tachometer is attached to the steering column to the right of the strip speedometer and a small bank of ancillary gauges is mounted beneath the dash. The instrumental panel and inner door panels appear in overall good shape. A modern AM/FM stereo with CD player may reside just above the small gauge bank.

The 1966 Impala was a mild restyle of the 1965, featuring a new instrument panel, grille, wheel covers (except for SS models) and rectangular taillights that wrapped around to the side of the quarter panels. Standard features now included lap belts front and rear, reverse lamps, day/night rearview mirror and a padded dashboard.

The 1966 models received only a minor facelift from its predecessor that included a revised horizontal bar grille up front and new triple, rectangular taillights that replaced the triple round lights used on full-sized Chevrolets each year since 1958, apart from 1959, and chrome beltline strips were added in response to complaints about parking lot door dings on the clean-lined ’65 models.

If you desire a mid-60s full-size car to race at a dragstrip or on a track, this might be the foundation you’re looking for. Stop by Mission Classics to today to take a peek in person at what you might bring home.

This car is currently located at our facility in Brooksvi 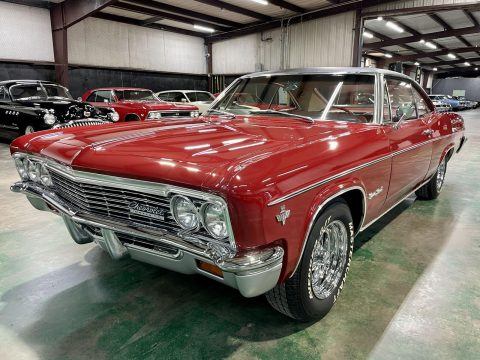 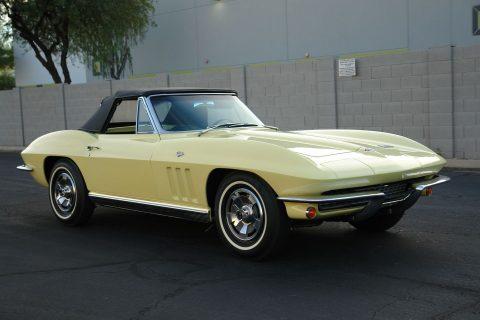 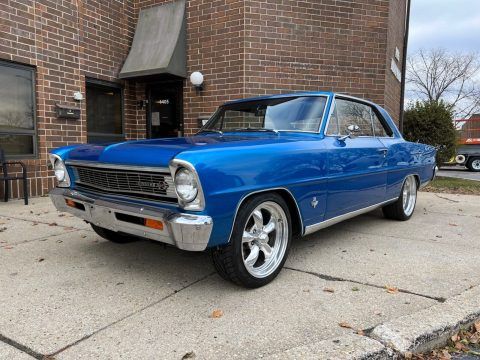 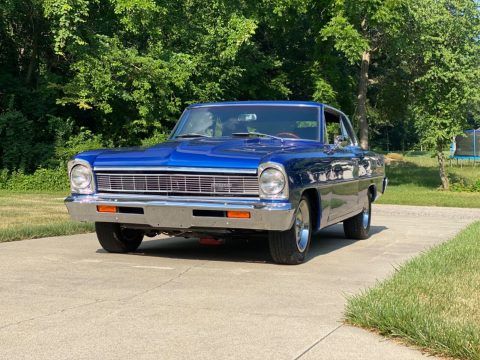