Brute force meets refined elegance in this incredible 1968 Dodge Charger Restomod. If I were a gambling man, I’d wager that this absolutely dialed-in showpiece will sell faster than any other six-figure car we’ve ever featured, and when you bear in mind the pedigree, build quality, and off-the-charts presentation, anything under $150K seems like a bargain in today’s market. Is the ’68 Charger the best-looking muscle car of all time? Hard to argue against it, and with a modern 6.1L HEMI V8 under the hood, an overdrive transmission handling the power, and custom suspension topped off with power 4-wheel disc brakes underneath, it’s definitely got the performance hardware to back up its awesome look. If you’re considering a no-expense spared, no excuses restomod muscle car, the you should call us now because classics like this don’t come up for sale very often. The color is Blue Metallic, and it was chosen from a selection of modern colors to closely resemble Mopar’s famed B5 Blue that took the automotive world by storm in the late-’60s. It’s a HUGE upgrade from the factory Code X Beige this Charger hardtop was born with, and it works exceptionally well on a performance car built to his caliber. It looks so fresh you can almost smell the wet paint and if there’s a better looking canvas than a ’68 Charger, I can’t imagine what it might be. The sharp edges are highlighted by the glowing, miles-deep blue paint and the combination of the bright hue and the painted-on silver stripe accents on the front end makes for a very intimidating package. The finish is show-quality, about as close to ‘perfect’ as you’ll find, although we won’t call it that because this line of work is far too subjective for absolutes and there may be a minor imperfection buried somewhere under the clearcoat that we just haven’t found yet. But just know that this beauty looks even better in person that it does in our photos, and that’s really saying something. Fit and finish are excellent as well, far better than most Mopars of the era, and the blacked-out, baleen-style front grille and hidden headlights look as intimidating as ever, matched by the blacked-out tail panel on the rear end. The chrome and stainless on the car are practically flawless, including the bumpers, mirrors, racing gas cap, and window surrounds, while the modern door handles were painted to match the car and work perfectly with aggressive styling of the dual contours up front, and the aerodynamic rear quarter scoops further back. An R/T badge was added in the front grille, but who cares, it’s one the coolest badges ever made and I wouldn’t be able to resist it either, while all the light lenses on the car are crystal clear and look brand new. At first glance, the interior might look a bit subdued, but once you’re behind the wheel you’ll realize that those modern power bucket seats are trimmed in high-end Saddle leather, as is the completely reworked matching dash, and the bespoke center console that runs the length of the cabin to the back where it splits a set of equally dialed-in leather seats. Yeah, it feels like a Lexus in here. Even the aftermarket tilt steering wheel got a leather rim from matching hides, and the uniform white stitching in the seats can be seen running along the top of that incredibly impressive console. A full array of white-face AutoMeter Mopar gauges mind the HEMI under the hood, a modern shifter was swapped-in from a late-model to manage the gears, and billet knobs, controls, cup holders, door hardware, and even A/C vents that all play the perfect contrast to that gorgeous tan leather. New carpets, fresh Saddle leather door panels, and a headliner that looks factory-installed (but you know, from a factory built in this decade) completely seal up the cabin from the outside world, allowing the driver to enjoy the modern HVAC system and kickin’ Kenwood AM/FM/AUX/SAT/BT stereo system. There are also power windows, extra storage and cup holders in the rear section of the center console, and a completely finished matching trunk that I’d be afraid to put a dirty handkerchief inside. A Charger isn’t a Charger without HEMI power, and the fuel-injected 6.1L HEMI V8 under the hood certainly doesn’t disappoint. This line of HEMIs debuted in 2005 and have been powering Mopar’s SRT performance cars ever since, so yeah, it’s going to get the job done for you, regardless of what that job may be. Hardly broken-in and as clean as a whistle, the engine is drop-dead gorgeous with a cold air intake and silver engine cover, HEMI valve covers, and beautifully organized accessories, plumbing, and electrics – all of which are modern, of course. The engine bay itself is dialed-in as well, with a smoothed and painted firewall and inner fenders, billet hinges, and impeccable detail that even preserved the original Mopar data plate (cleverly repainted the original factory color). A giant BeCool aluminum radiator keeps the whole show nice and cool, while a capable, modern 4-speed automatic transmission with overdrive handles all the power and spins a heavy-duty rear-end that delivers it to the wheels. Long-tube headers feed a new dual exhaust system that gives it a spectacular roar, modern power steering is uber-responsive, and Wilwood 4-wheel disc brakes with drilled and slotted rotors not only enhance performance but look awesome behind the staggered (18″ front; 20″ rear) American Racing chrome wheels wrapped in performance rubber. We can’t seem to keep Chargers in stock, and this one is one of the nastiest we’ve ever featured. It’s definitely got the performance to go with that industrial-strength look. Call today! 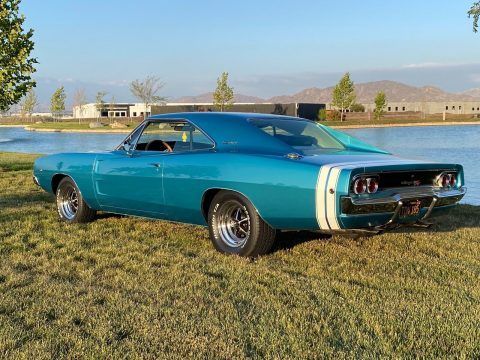 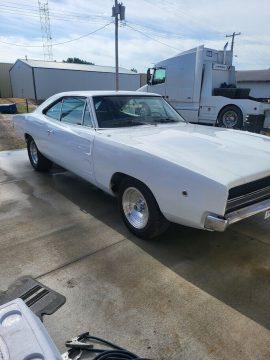 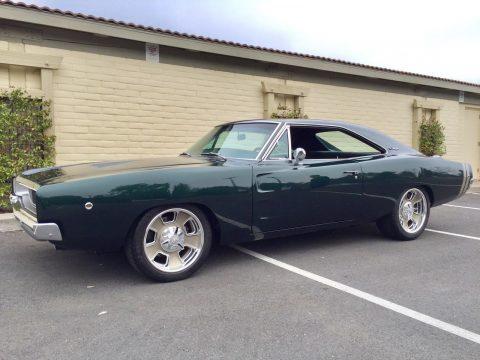 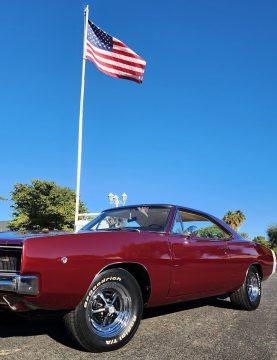 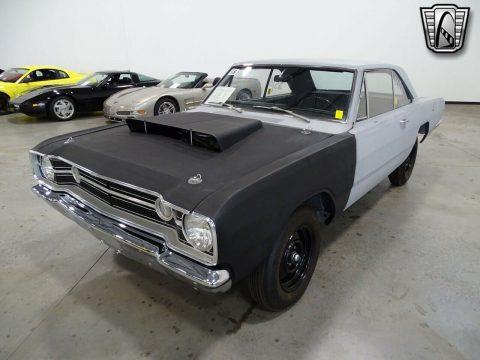